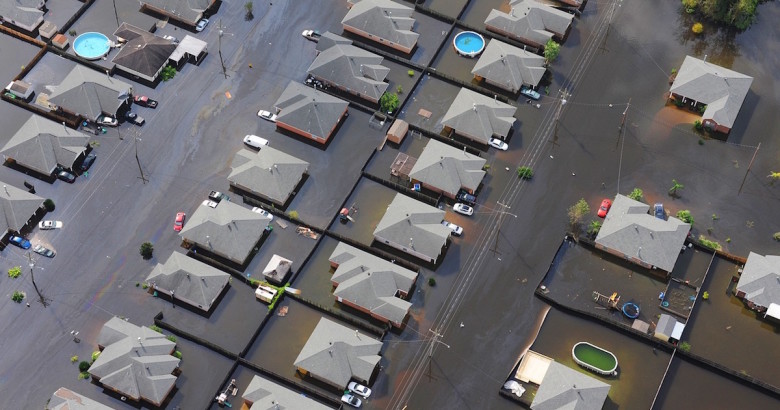 Let’s go back a little in time, October 2015. Torrential rain pummels South Carolina. Weather forecasters call it a 1,000-year storm, meaning there was a 1 in 1,000 chance of a storm this size happening in a given year, and it did. The rain doesn’t stop, not until a dam is breached and homes and lives are lost. Even after the rain lets up, the rivers will still crest and cover more land in water, damaging more homes, and threatening more lives.

By the time it was done, it’s estimated that billions of dollars in damage have been done.

Go further back to April 2015. On April 3, in Louisville, Kentucky, severe weather required a flash flood warning for residents. While the devastation in South Carolina may make national news, it’s the smaller flooding problems in Kentucky that are most common.

Stories like this play out all over the country. Whenever rain falls heavily, there’s always a threat for flooding. You may feel safe because your home is in a low risk flood zone, but low risk doesn’t mean no risk. You should still have a flood insurance policy.

Flooding is more common than tornadoes, earthquakes, and fires. They strike with little warning, and when water comes rolling in, nothing can stop it. Over the 30 year life of your mortgage, you have a 26% chance of being flooded. If you’re in a high risk flood zone, it doubles to 50%.

A standard Massachusetts homeowners insurance policy doesn’t cover flood damage. You need to buy a separate flood insurance policy provided through the National Flood Insurance Program (NFIP). You can’t buy it directly from the NFIP but will need to work with an insurance agent. When you purchase coverage, there’s a 30 day waiting period, so don’t wait until the last minute.

If you live in a high risk flood zone, your mortgage lender may require that you purchase flood insurance. For everyone else, it’s an option. In low risk flood zones, depending on the age and structure of your home and the deductible you choose, you could pay as little as $119 a year for flood insurance. The average policy only costs $570 for the year.

For flooding disasters that reach epic proportions, a state of emergency may be declared. This is done to make disaster-assistance dollars available to help rebuild and clean up. Don’t consider this your backup plan. The assistance you receive isn’t free money. It will actually be an interest-bearing loan that you’ll have to pay back over a 30-year term.

It’s always best to err on the side of caution, especially when the danger can come from something as unpredictable as Mother Nature. Before the heaviest rains fall this year, consider adding a flood insurance policy to protect your home.